Asuka is the origin of Japan.

Hello the Asuka region, there are a lot of viewpoints by a historical climate and natural environment’s being preserved by enacting politics, the center of culture, and the Asuka law it when the country of Japan comes to strengthen the basis for the first time as a nation.

STONE STRUCTURES, FIGURES, KOFUN, CULTURAL FACILITIES, RUINS and so on…

What is the ASUKA ERA?

The ASUKA Era chronologically speaking is from Empress SUIKO’s accession to the throne of TOYURA NO MIYA Shrine at the end of the 6th Century until Empress GENMEI relocated the capital to Nara’s HEIJOKYO in 710A.D. therefore lasting approximately 100 years.

During this time, the governments and Cultural centers were all located within ASUKA, therefore they refer to this period generically as “the Asuka Era”.

The Asuka Era is considered to follow the spread of Buddhism from China and Korea. This era broke away from the Tumulus period to the development of new politics, economy, society, and reforms. Leaping from the old YAMATO(Japanese) administration and the allied clans to an Imperial system(based on the legal codes of the Nara and Heian era) one would say this was the formation of a Japanese Nation.

History of the ASUKA ERA.

Before the Asuka Era, the Tumulus Period failed to maintain any constancy due to severe disputes concerning the Royal authority, as well as, disputes between clans which had conflicts of interest regarding profit. In the years immediately preceding the entrance of the Asuka Era, disputes between the SOGA and MONONOBE clans, which both centered on Buddhism, were quite severe; however, the SOGA clan’s success marked the end of a period with clan oppositions.

At this point enters Prince SHOUTOKU who paved the path for a more systematic state, he brought forth a system of government with the Emperor being the center. Prince SHOUTOKU is recognized as the first regent of Empress SUIKO who was entrusted with the government. This administration held Buddhism as the basis while establishing orders of destined social rank, a new constitution and raised the Imperial House as the nation’s authority; resulting in the establishment of a unified Nation with the Emperor as the central figure. The resulting prosperity in this region is observed through construction of magnificent Buddhist structures, also the architectural and carvings of this period created a vibrant Asuka Culture.

After Prince SHOTOKU’s death, the political control returned again to the SOGA clan. SHOTOKU’s son, YAMASHIRO no OE was forced to commit suicide (assassinated) leaving Prince NAKA no OE (later being referred to as Emperor Tenji) to intervene and bring an end to the SOGA clan. This is known as the famous ISSHI Incident(the TAIKA Reforms.)

Japan’s current culture found its roots in the cultural design of the ASUKA ERA. During this period they erected great structures and sculptures in what is referred to as [ASUKA STYLE] which eventually transitioned to the HAKUHOU and TENBYOU styles.
Currently there is very little of ASUKA’s culture remaining, however, one can see remnants of ASUKA’s cultural design in YAMADADERA KAIROU, ASUKA DAIBUTSU, as well as, in IKARUGA’s HORYUUJI Temple. On another spectrum, Japan’s literary origins come directly from the MANYOSHU (Manyo Poems).

MANYOSHU is recorded as the songs or poems of ASUKA’s people of that era. ASUKA’s superior level of culture is seen in the poems which deal with the everyday lives and sentimentality of the people of that period. They are considered excellent literary works even today.

History of women in Asuka

This is the birthplace of Japan, the place of origin.

Would you like to learn of the history and traditional culture of Japan? Would you like to see the most iconic scenery typical of Japan? You must visit Asuka Village, Nara Prefecture. Approx. 1400 years ago, Japan was born as a nation with its capital in Asuka. The name “Nippon,” the governmental structure, economy, and diplomacy started in this place. Asuka has a large number of ancient and historic sites with beautiful scenery that is considered the ancient
memory of the Japanese people. Feel the wonder of ancient times in Asuka, where the entire village is a museum! 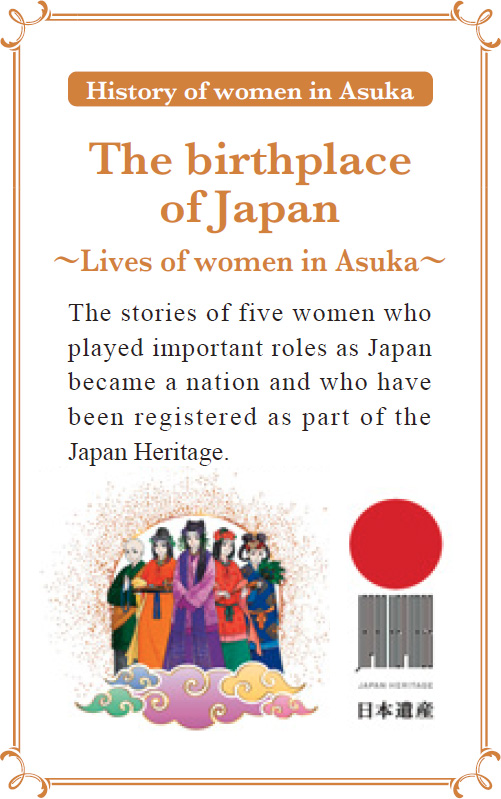